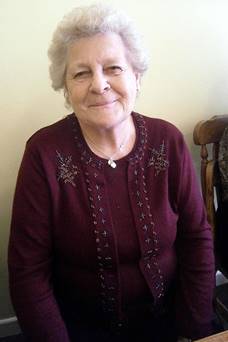 Sandra White had an unexpected surprise for 2016. She was awarded the British Empire Medal in the New Year’s Honours List for services to elderly people in Shirehampton.

Sandra has lived in Shirehampton for many years and runs the Penpole Lunch Club with the help of volunteers. She is also a member of the Penpole Residents Association and involved with several activities and local committees in the area including LinkAge and Neighbourhood Watch.

“When the letter first came I thought it was someone winding me up because it’s the type of thing my brother Jim and my son Stephen would do as a joke. It was only when my daughter Tracy rang the phone number on the letter and a lady answered saying ‘good afternoon, Buckingham Palace’, that I realised the award was genuine”, said Sandra.

“I just couldn’t take it in really. I was overwhelmed at the time. However a few days later I got a call from the Cabinet Office and that made it real. By then I was really happy about it, over the moon I guess but I never expected to get an award like the British Empire Medal. I do the Lunch Club and other activities voluntarily because

I enjoy doing it, meeting people and seeing them happy. I like to help out where I can”.

I asked Sandra if she solved the mystery as to who nominated her for the award. “Yes I have. It was a large company in Avonmouth called Nesbit’s that I have a lot to do with and they nominated me as they felt that that my voluntary work with the elderly had to be recognised in some way”.

The reaction that Sandra has received from family, friends and the local community has been very positive. It’s taken five times as long for Sandra to walk through the village with many people stopping to chat and congratulate her. In addition to this Sandra tells me that “a certain someone also told friends to bow or curtsey when they saw her in the village” and she starts laughing about that.

Next on the agenda is a presentation of the British Empire Medal by the Lord Lieutenant who had already sent a letter of congratulations to Sandra a few days after the news broke.

She is hoping to arrange a little ceremony at the Penpole Community Room with family and friends before she makes her way to Buckingham Palace in May for the Garden Party, which she is looking forward to.

However Sandra added “I’d also like to thank Debbie, Emma, David, and Madeline for helping me week in week out with the Lunch Club as I couldn’t run it on my own, and Sandra for making the cakes.”

Photos and story by Kathryn Courtney.