Colour Black & White High Contrast Text only
Text size: A A A A
Skip to content
Home » News » Stockwood Christmas Quiz the Biggest Yet!

Friday 12th December saw Stockwood’s Christmas quiz take place at the Whitchurch & Pensford Royal British Legion. An annual event in Stockwood’s LinkAge calendar, the Christmas Quiz has been growing year on year and 2014 saw the biggest attendance yet, with over 70 people attending! 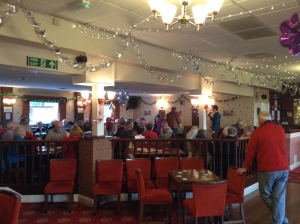 The event was a huge success in every respect with everyone having a great time answering the festive themed questions, filling their bellies from the buffet, trying their luck at the raffle and being entertained by LinkAge’s own ‘John the Troubadour’. John is LinkAge’s new fundraiser and he agreed to take a day off to entertain the guests so a huge thank you to him. Cash prizes were won by the top three teams so there are going to be several Christmas stocking that are fatter than usual this Christmas.

Massive Christmas thanks also go out to Roy, the quizmaster; all of the LinkAge advisory group for their dedication and hard work; Judith for her sterling work running the raffle for the entire year; The Royal Legion for hosting the event; and last but not least Gina, Stockwood’s LinkAge Administrator, for her monumental organisation, without which the quiz would have not taken place.