Colour Black & White High Contrast Text only
Text size: A A A A
Skip to content
Home » News » The Henbury Centre’s Christmas Fayre 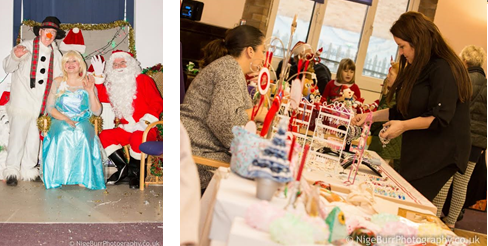 On Saturday 28th November, The Henbury Centre held its first ever Christmas Fayre with over 100 people attending. Stallholders could be seen selling beautiful homemade crafts and stocking fillers, Frozen’s Elsa was busy face painting, Father Christmas and Mr Snowman had their very own grotto and LinkAge volunteers ran a refreshments and bric-a-brac stall.

The Christmas Fayre was a hit for the local community, with their being something for everyone on the day. The dreadful weather had us worrying at first that it might put people off, but we were soon reassured when people could be seen queueing out of the door, before the fayre had even started!

Local Councillor Chris Windows dressed up as Henbury’s very own Father Christmas and he was joined by local LinkAge volunteer Ray Laver, who was there as his right hand man, Mr Snowman.

LinkAge volunteers ran two stalls on the day, both raising funds for the LinkAge Henbury and Brentry hub. After a busy day of entertainment, activities and selling the total amount raised was announced as an amazing £300!

The feedback from the day was brilliant, with locals saying it was great to see something take place on a weekend and some even said that prior to the event they hadn’t realised that Henbury had the local community centre. It was amazing to see the centre so full and busy and to meet new people who are now interested in attending our activities in the future.

We’d like to say a big thank you to Becky Harrington, the hubs new administrator whose hard work really made the event that it was. We would also like to thank Nigel Burr for taking photographs for free on the day (nigelburrphotography.co.uk). And finally, we would like to say thank you to all of our volunteers and stallholders who worked tirelessly on the stalls.

We look forward to what next year’s fayre has to bring.

LinkAges ACE Project Changed My Life!
Festive LinkAge Activities for the Over 55’s